Dunn Carney’s Team People is a group of highly skilled trial lawyers representing plaintiffs who have been harmed by the wrongful acts of others and who are seeking to pursue their rights and recover compensation.

Team People thinks strategically and has the experience to anticipate and counter powerful opposition. We have developed the tools necessary to level the playing field for our clients. Our team of trial lawyers has decades of experience in the courtroom. We have developed and refined strategies helping clients succeed against defendants with unlimited resources. We protect our clients’ interests and achieve meaningful results against large, often global, companies.

We are passionate advocates who will work fiercely on your behalf to hold parties accountable and achieve justice for you.

Your Rights. Our Expertise.

Several of our recent successes are listed below.

$818,075 judgment for breach of dairy lease following jury trial. We represented the dairy in a case involving a lease dispute between a Tillamook-based dairy and its landlord. Jury found the landlord liable for breaching the parties’ lease, and for causing significant economic harm to the dairy.

*Results achieved by our litigation attorneys on behalf of one client in one matter do not necessarily indicate that similar results can be obtained for other clients.

$1,150,000 settlement of motor vehicle traumatic brain injury claim. Client was a pedestrian who was struck and seriously injured by a teenage driver while trying to cross the road at a crosswalk in Portland, Oregon. Teen driver was involved in illegal drag racing at the time and was going at a high rate of speed.

Confidential amount paid in settlement for motor vehicle traumatic brain injury claim in Portland, Oregon. Client was a medical doctor, who was forced to retire as result of a traumatic brain injury he suffered when his sedan was hit by a commercial truck making an illegal left turn. The truck driver was believed to be on his cell phone at the time of the accident.

$515,000 settlement of crushed pelvis as a result of motor vehicle accident. Client was the passenger of a vehicle that was t-boned in the middle of the night by a teenage driver who had run a red light at a high rate of speed. 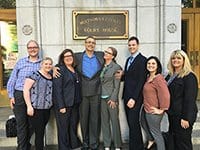 Members of Team People celebrate with their client after a jury awarded him $1.25 million in an employment retaliation case.

$1,250,000 judgment for retaliation claim following jury trial in Portland, Oregon. Verdict found that Li Ning, a Chinese athletic shoe company, retaliated against a director-level employee who complained he was demoted because of his race and national origin. Read about the judgement.

$620,000 judgment for Sarbanes Oxley whistleblower claim against Riverview Community Bank. Client was an auditor for the bank who was fired for reporting alleged fraud at the bank. Read about the suit and settlement.

$1,000,000 farm-related wrongful death claim in Portland, Oregon. Our litigators obtained a policy limits settlement for the family of a teenage boy who died when the hay wagon he was driving was struck by a logging truck making an illegal passing maneuver on a two-lane rural highway. Details about the accident can be found here and here.